Skip to content
(Editor’s note: "Blow me, ESPN Insider" was the working title for Elton John’s smash hit, "Tiny Dancer.")
So I’m a little late in doing my pre season research for the NBA, but since I’m an ESPN insider (I DO mean to brag), I thought I’d take advantage of my insider privileges and read Kevin Pelton’s team-by-team projections for every NBA player’s 2017-18 season.
(Here you go if you are an ESPN insider.)
I’m fine with all the new statistics…
(Editor’s note: Joe is an old crank who puts like 7 spaces after every period, which I have to go back and delete. How do you think he REALLY feels about these newfangled stats?)
…but give me a fucking break with this. I’ll just use Golden State to illustrate. Here are the COMPLETE player predictions for the season. 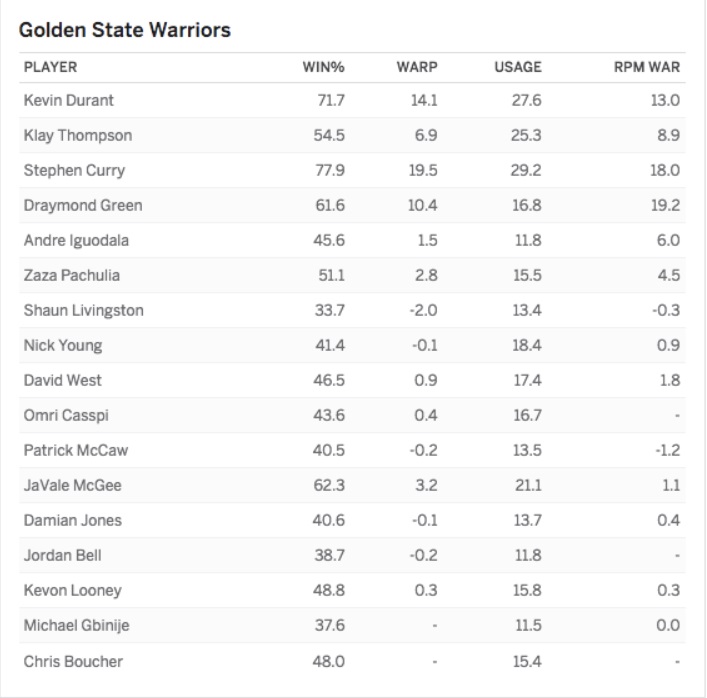 Hmm, let’s see what startling revelations there are…..OHHHHHH I didn’t know Durant was predicted at 14.1 WARP for this season. I don’t see him WARPING any higher than 13. And you can’t tell me that Sean Livingston only has a 33% winning percentage. OUTRAGE!!!!!.
I’m fine with putting this analytics stuff up there, but I’m going to say more people want to know if Steph Curry is going to score 28 points a game then if he’s going to have an 18 RPM WAR. (Also, I’m sure Kevin is familiar with what all this shit means, since he invented it, but a little bit of explanation for us dum-dums might help too).
Know your audience ESPN, we aren’t all robots (yet).